skip to main | skip to sidebar

British and France were the first really modern nation-states and, as a consequence, were among the first (along with Sweden and the Netherlands) to enter the demographic transition. The French Revolution marked the beginning of the secular fertility decline in France, whereas the industrial revolution in England encouraged family formation (earlier marriage, higher fertility). Throughout the nineteenth century, the fertility gap between these two nations was hugely detrimental to France as can be seen from the graph. 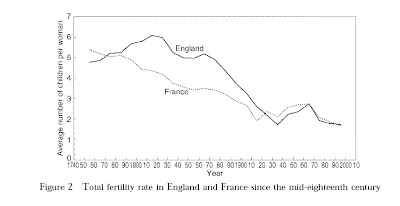 During the 1800–1880 period, the difference between Britain and France ranged between 1.3 and 1.8 children per woman: that is the same value as the difference between the prevailing present fertility and zero. This fertility differential evidently had tremendous implications for foreign policy and for the fate of the future European colonies. As a consequence of this relative differential France lost its position of leadership to England; the French language regressed all over Europe and, contrary to English, never acquired a world status; moreover, French emigration was very limited. By contrast, from the beginning of the nineteenth century British emigrants exported their ideas, their ideals, and their language on all continents. In “northern” America (north of the Rio Grande), only 2% of the entire population (namely,the population which is to be found in Quebec) uses the French language to communicate in daily life.

As can also be seen above, staring at the turn of the 19th century French fertility has gradually regained its relative position vis-a-vis the UK.
Posted by Edward Hugh at 5:58 PM

This blog is not a normal weblog as such, but a collection of working notes, kept for easy reference to accompany posts on Demography Matters, Global Economy Matters, A Fistful of Euros etc. Still if you are reading this, I hope you find what there is here useful. If you are looking for country specific information you might find the categories section on Demography Matters useful, or indeed anything on Global Economy Matters